This display shows 11 items of the Thetford Treasure found at Gallows Hill, Thetford in 1979. The whole treasure includes 44 pieces of jewellery, 33 silver spoons and a shale jewellery box. 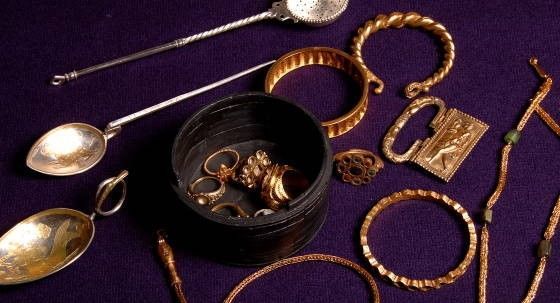 The Thetford Treasure was found by metal detectorists Arthur and Greta Brooks in 1979 and includes 44 pieces of jewellery and 33 silver spoons. The treasure was buried in around 390 AD when opposition to religious cults was rife. The treasure was not declared straight away so the opportunity to study the site where it was found was sadly lost. This will be the first-time items from the hoard have been on display in the town’s museum since 2008. This special exhibition includes items such as the gold belt-buckle, a gold chain necklace, gold bracelets, gold finger rings, a pendant, a silver strainer and inscribed silver spoons. They represent exquisite workmanship both in terms of their manufacture and their decoration; many pieces detail inscriptions and depictions connected to Roman mythology. The imagery featured on some of the objects connect to Roman deities including Faunus, Bacchus and Diana.

Thetford is 40 minutes drive from Norwich and Cambridge. Ancient House is in Thetford’s historic town centre. The museum is a 7 minute walk from the railway station and two minutes from the main shopping street with cafes and sandwich shops.