The East has long been a draw for artists and creatives, inspired by the landscape and the light from our big blue skies and bucolic sunsets. New exhibitions are now showcasing works in unique settings which add to their impact. Here is the autumn’s ‘must see’ list:

Grayson Perry: The Pre-Therapy Years at The Sainsbury Centre of Visual Arts

Grayson Perry’s ground-breaking ‘lost’ pots have been reunited for the first time to focus on the formative years of one of Britain’s most recognisable artists. Often challenging and explicit, these works reveal the early development of Perry’s distinctive voice that has established him as a compelling commentator on contemporary society. This exhibition is the last on the collection’s tour in the UK and will not be going to London.

Leiko Ikemura: Usagi in Wonderland at The Sainsbury Centre

Discover the Japanese-Swiss artist, Leiko Ikemura, who presents a selection of paintings, sculptures, drawings and photography in her first UK exhibition. Ikemura has selected 50 works that span three decades of her career. Her art appeals to our imagination with its childlike purity.

The exhibition’s dominant theme is the connectivity of all aspects of nature, be it human, animal, plant or mineral, in an eternal circle of life. Through her fantastical figures and primeval landscapes, Ikemura explores fragility, transience and slow evolutionary change – choosing to address environmental issues from an empathetic, global perspective.

Running under the Norfolk Wonder banner and part of Norfolk County Council’s EXPERIENCE Project, Rider Spoke is an art project by Blast Theory, which mixes art, theatre, and location-based technologies. An audience favourite for the Norfolk and Norwich Festival (NNF) 2021, it invites you to cycle through the streets of the town. You will be guided by a smart phone attached to your bicycle, as you search for a hiding place and record a short message there. And then you search for the hiding places of others. Working in partnership with the GroundWork Gallery, King’s Lynn; The Little Theatre, Sheringham; and St. George’s Theatre, Great Yarmouth, the Festival will present Rider Spoke over six weekends in October and November 2021. Click here find out more and book tickets for the Norfolk and Norwich Festival 2021.

(Across Norfolk; King’s Lynn, Great Yarmouth and Sheringham – at weekends between 8 October and 14 November) 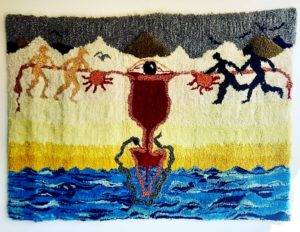 Zéthu Zizwe Ruby Maseko “of water and womb” at 303 Projects

Exploring de-colonial thinking, investigating de-colonial memory practices using ritual, storytelling, sonics and spiritual objects. In her practice, she draws on issues of racial and gender politics, post-coloniality and Black experience in the UK.

For her exhibition at 303 Projects, the skill and craft of tapestry and weave are a means to record and archive overlapping histories of identity, struggle, and the sea, and explore new mythologies.

Zéthu is a Swati and Cornish artist and musician based in London and works across performance, film, sound and sculpture and often delivers workshops. She recently exhibited in the New Contemporaries 2020, and ‘Reflect Remember Reclaim Health’ at the ICA, London.
(303 Projects at 303 London Road South, Lowestoft, Suffolk. Runs from 18 September to 31 October) 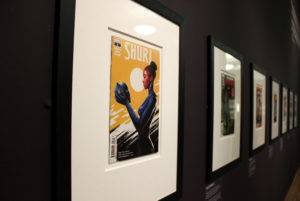 Three iconic costumes from Marvel Studios’ Black Panther are currently on display in a new exhibition at Christchurch Mansion. The outfits of T’Challa, Shuri and Okoye featured in the ground-breaking film sit alongside Marvel comics, historic museum objects and local stories.

From folklore to fake news, people have told stories for thousands of years. These three costumes from Marvel Studios’ Black Panther are woven into a patchwork of storytelling traditions from across time and place. From music to movies, carvings to cartoons, this exhibition asks how the stories we know shape the way we see the world. 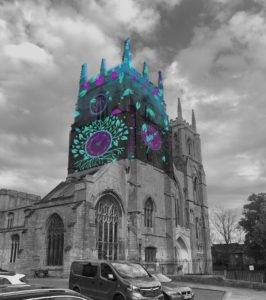 Take a look at the promo video ‘Transmission 1’ featuring the actor Kate Dickie, who will also be appearing on cinema screens directly addressing the town’s citizens! 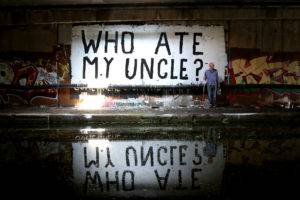 Who Ate My Uncle?

Rhythm and Geometry: Constructivist art in Britain since 1951 examines the rise of this dramatic strand in post-war British art led by the example of Victor Pasmore, who famously converted to abstract art in the late 1940s.

Catch these gems before they finish!

Edible East Art/Science Trail features new artworks inspired by world-leading science about the future of food. Investigate how the latest science of microbes and genetics can improve the health of plants, people and the planet.
(Various locations, Norwich. July 21 – October 31).

Norfolk Open Studios has established itself as one of the largest and most successful open studios schemes in the country. It gives visitors the opportunity to see new art, meet artists, and – with many of the works on display being for sale – to buy original artworks directly from their creators. Over 260 studios and schools are taking part. Studios are FREE to visit and visitors don’t need to book in advance, unless they are a large group.
(Norfolk Open Studios. Runs until 10 October)

The Moon, meet out nearest neighbour and discover what the Moon is made of, how it has influenced our history, culture, and natural world, and how we have explored it from ancient times to the present and future. This touring exhibition features fascinating objects such as a large inflatable Moon, scientific instruments, and actual Moon rock on loan from Bespoke Scientific. Admission to the exhibition is FREE. Please book for timed entry.
(Ipswich Art Gallery, Ipswich, Suffolk. Runs until 10 October)

For more cultural events in Norfolk and Suffolk, visit Head East regional culture tourism campaign blogs and sign up to our newsletter below for more information about what’s on. 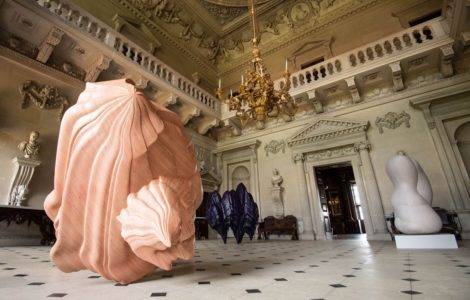 Recent Posts
Where to see Autumn colour with the National Trust in the East of England
More Details
Head East – Ready to applaud?
More Details
Top 10 reasons to see Dippy on Tour at Norwich Cathedral
More Details
Read more from our inspiring blog…
We use third-party cookies to enhance your user experience and for performance monitoring. By using our website you consent to accepting third-party cookies. OK
Privacy & Cookies Policy